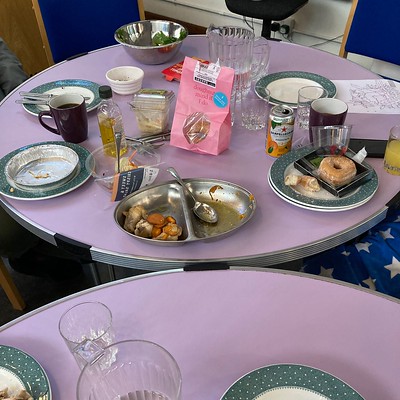 Notes in no particular order on Lloyd’s week 6-12th September 2021.

Definite “Back to School” vibes this week. The weather changed, firstly to the warm (bordering on sizzling) and then back to the grey that we got used to in August.

James and I are getting ready for Film Club – we’ve set the first date for Wednesday 22nd September at 2pm and we’ll be watching Remains Of The Day, the Merchant/Ivory production from 1993 starring Anthony Hopkins and Emma Thompson among many other top names. Like more recent works such as Downton Abbey, it deals with the fading of the aristocracy through the eyes of those in service to them as well as the changing relationships between men and women in their workplace before and after the Second World War.

We’re planning to be in the Meeting Room and soft drinks, tea & coffee will be available alongside the mandatory choc-ices and popcorn. Please let me know if you’re planning to come, but also spread the word to others who might like an afternoon doing something different.

We can’t charge for admission, so it’s free to get in but there will be a bowl for donations to keep us in refreshments.

At Sunflower Café this week we got to know new friends John and Pat a bit better and I learned about the important differences between the Guildford Model Engineering Society (of which I think we have some members in the congregation) and the Astolat Model Railway Circle (of which John is a member).

Also Ellie joined us to share the news of her Silver Award in Guildford in Bloom for her allotment to complement the Gold Award that Ian picked up for the Church Garden.

We’re now planning to re-start our dementia-friendly singing group, renamed “Mindful Music” (at least until someone points out an intellectual property problem with that name!) on Wednesday mornings – so that will be the 1st and 3rd Wednesday of each month and the other weeks will be Sunflower Café as usual. We’ll be singing mostly popular songs from the 50s, 60s and 70s together and doing some seated co-ordination exercises with the opportunity to join in with percussion on some songs. Suggested donation of £3.00 per person – tea, coffee and biscuits will be served.

Panto Progress: We’re working on the theme of “Sleeping Beauty” – do let anyone with theatrical interests know that we’re forming a group to get this going soon.

We’re still teetering towards a redesigned website and pretty much all of the content is ready for launch. Thanks to Ria for all the work and help on implementing our ideas.

Friday Lunch With Friends Episode 2 happened today with an expanded cast and doughnuts that disappeared very quickly once opened. Come along any time, the two hours do fly by – and bring whatever you fancy, it’s been nice to try some different things together (and did I mention doughnuts?).

I’m reading in church this Sunday and I’ll be there for Church Meeting too, so see you then.